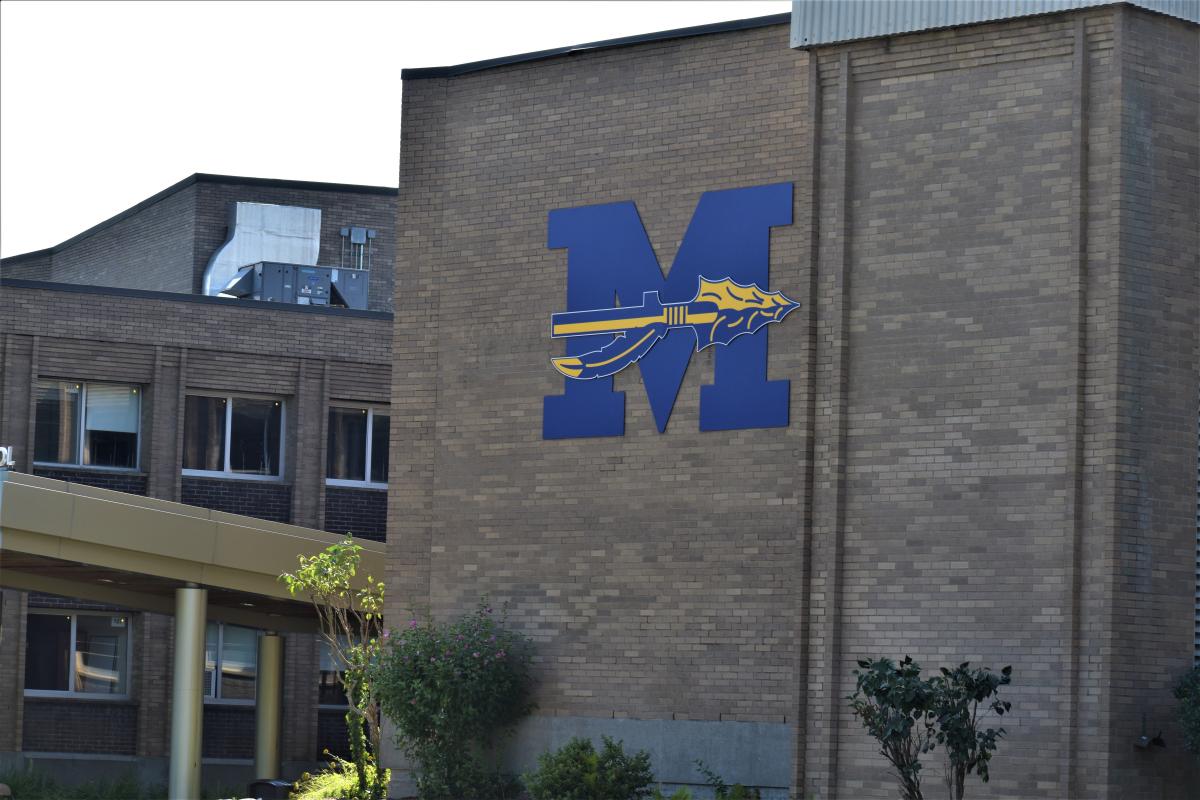 MAHOPAC − Anticipating the possibility “Indians” may be dropped as the nickname of the district’s athletic teams, the Mahopac Board of Education Tuesday night agreed that only an “M” will be at the center of an artificial turf field that’s being replaced, instead of the current logo, which is an M, with an arrow and a feather.

But with trustees noting the full logo could be painted later, if desired, the board made it clear no decision has been made on whether Mahopac will comply with a state Education Department directive that schools scrap Native American nicknames and logos.

The state issued orders last month and with it the threat that non-compliance districts could lose state aid and/or face removal of school superintendents, boards of education trustees and even district clerks.

The edict followed the education department’s victory in state Supreme Court which effectively forces the upstate Cambridge Central School District to abandon its “Indians” nickname. The state went to court after the district announced plans to end use of the nickname, then reversed itself.

But that issue isn’t fully settled.

Cambridge is appealing the court decision and a ruling, according to Mahopac Superintendent of Schools Christine Tona, isn’t expected for weeks.

Plus, the state’s edict provides a potential escape mechanism. The education department has said a district may keep Native American nicknames and/or mascots with the approval of what Tona explained as a “federally recognized tribal nation within the state.”

While Tona and trustees have questions about the state’s definition of a tribe in the state, they agree to try to get tribal approval as a safeguard in case they ultimately decide to try to keep the Indians’ nickname.

Tuesday’s meeting was a board work session and, as such, no public comments were allowed.

But community opinion is said to be divided.

Board members didn’t tip their hands on which way they personally lean, but they did seem united in concern about the potential costs associated with any name change.

Tona, who noted the district had abandoned Indian feathered headdress imagery years ago, said she didn’t know whether the state would accept Mahopac’s current M/arrow/feather logo, an issue separate from the actual name “Indians.”

No dollar figure was cited but worry was expressed about the cost of eliminating the logo, since it adorns team uniforms, multiple artificial turf fields, building walls and gym floors.

“I speak to so many residents who overwhelmingly take pride in the name Indians,” Trustee Jonathan Schneider said.

But while he indicated the term was never intended to be negative and the intent was positive acknowledgment of people who once lived in and around Mahopac, Schneider expressed concern about most people’s lack of actual knowledge about the hamlet’s first inhabitants.

Schneider, other board members and Tona suggested the district incorporate studies of the area’s past Native American residents and their culture into Mahopac’s K-12 curriculum.

“I think it’s truly important that all students understand the history,” Tona said, characterizing the area as having been created by Native Americans’ “hard work.”

Trustee Adam Savino said the studies would be designed to “honor the people who were here before us.”

Whether those people would like the Indian nickname is, of course, unclear.

Technically, the SED rule requires state Board of Regents approval.

The state recently announced a 60-day public comment period, beginning December 28, will be held before the Board of Regents votes on the matter in April.

Some trustees were skeptical comments would truly be considered by the Board of Regents and rubber-stamping of the SED rules might occur.

Still, it was agreed a link would be provided on the district’s website, directing people to the place where comments may be posted.

“We’re proud of our area and the history around it,” he said.

Wappingers also has to decide about Ketcham ‘Indians’

Two of the most recent were the Nyack Indians (now RedHawks) and the John Jay-Cross River Indians, now Wolves.

But Mahopac is not the only holdout.

The Wappingers School District (named after the Wappinger tribe) will have to decide about Roy C. Ketcham High School, whose teams also play under the nickname Indians.

And there, too, it’s unclear how the board will respond.

Dr. Dwight Bonk, the Wappingers School District’s superintendent of schools, referred to the public comment period and Board of Regents upcoming in saying Tuesday, “As this is an extremely sensitive issue within our community, the district will be monitoring that process carefully, prior to reaching a final decision…”

In Mahopac, the issue is not on the agenda for the board’s regular meeting Thursday night. Schneider, though, said he expects many residents to speak about the issue during Thursday’s public comments period.

With trustees breaking into executive sessions to discuss other matters, it was left unclear whether a public vote would be considered.

Nancy Haggerty covers cross-country, track & field, field hockey, skiing, ice hockey, girls lacrosse and other sporting events for The Journal News/lohud. Follow her on Twitter at both @HaggertyNancy and at @LoHudHockey.