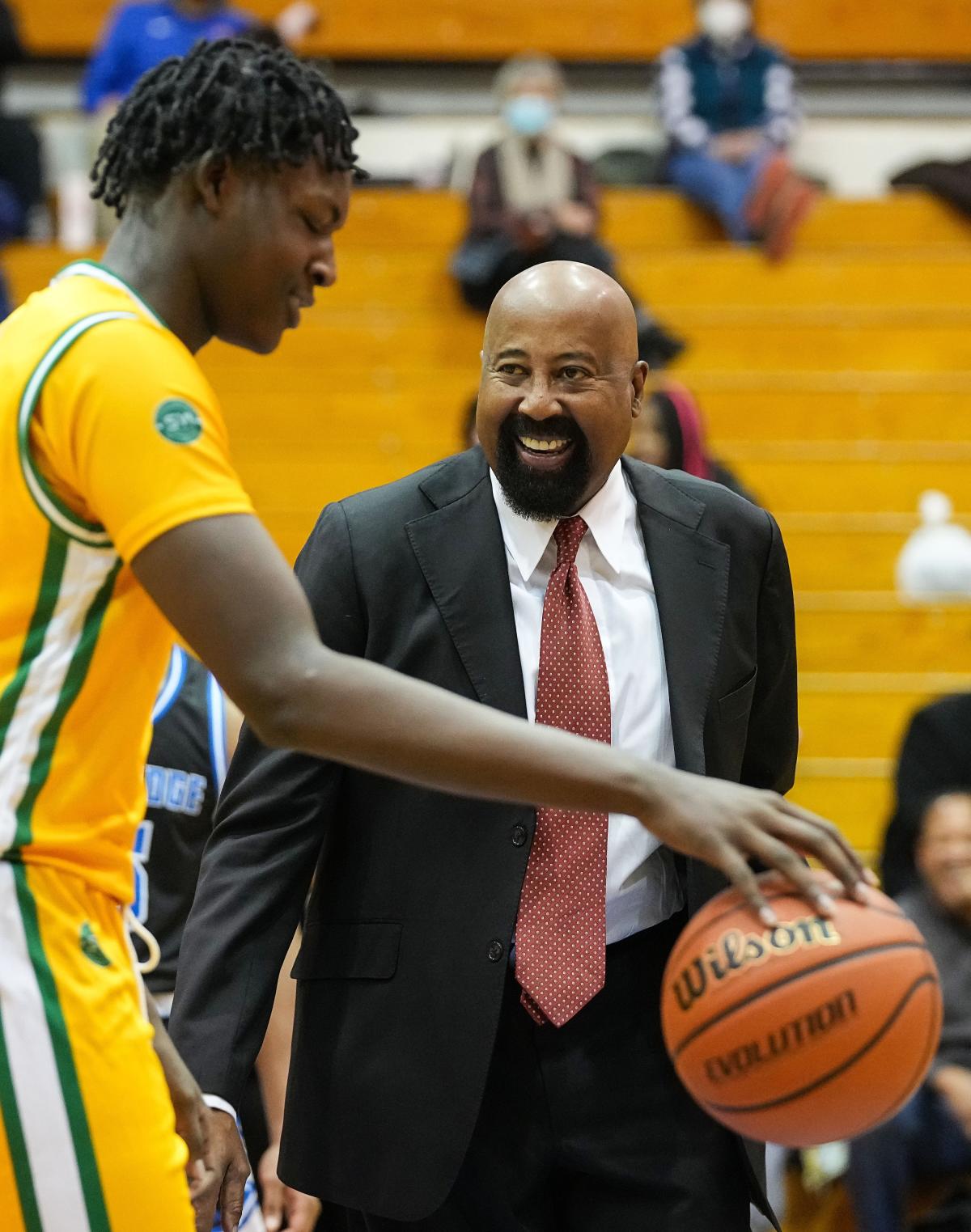 Mike Woodson could not remember exactly how long it had been since he had returned home to Broad Ripple High School. But the man who helped him become a man was the reason he returned Tuesday afternoon.

Woodson and his wife, Terri, made the trip to Broad Ripple on Tuesday for the first Coach William R. Smith Sr. IPS Basketball Classic, a four-game event with two boys and two girls games. It was an important visit personally for Woodson, who was 13 years old when he lost his father, Chester, to a heart attack.

Mike Woodson, Broad Ripple superstar:‘Best to come out of Indy since Oscar Robertson’

“(Smith) entered my life at a very early age,” Woodson said. “I was 15, 16 years old when I came to Broad Ripple. And he left an imprint. I mean, when you think about where we started and where we ended up — he ended up working for me as an assistant coach. So our journey together was special. I was with him two weeks before he passed. So to see all the high school student-athletes come back for this means a great deal to me.”

Woodson, like many in the Broad Ripple community, was disappointed with the Indianapolis Public Schools board’s decision in the fall of 2017 to close Arlington, Broad Ripple and Northwest at the end of the 2017-18 school year. “I’m just a little upset that the school closed as a high school,” Woodson said. “Of all places, you’d never think Broad Ripple High School would not be in existence. I hope it comes back.”

That is also the hope of Broad Ripple’s strong and vocal alumni group. The decision to close Arlington, Broad Ripple and Northwest caused a public outcry among alumni at all three schools. None was as passionate as Broad Ripple, which had the largest crowd at its meeting with the IPS board and a public comment session that took up all 90 minutes.

That passion has not subsided.

“I went to school here so maybe I’m being biased,” said Curtis Baker, a 1975 Broad Ripple graduate who played football and competed in track and field. “But this school represents so much more than just a building. When we have events like homecoming, classes from the 1950s to the present all show up. We’re probably the only high school in the city that has a parade right through the city. I can brag on Broad Ripple all day.”

The goal for Baker, 1975 classmate Jerry Cox and other Rocket alumni is for the school to eventually reopen. The one-day event honoring Bill Smith is expected to be an annual happening. Woodson made a short speech prior to Crispus Attucks’ 71-53 victory over Shortridge in one of the two boys games and made the ceremonial jump ball toss.

In the game, 6-8 sophomore Dezmon Briscoe finished with a game-high 22 points.

“It was good to have (Woodson) here,” Attucks coach Chris Hawkins said. “He’s an IPS kid through and through so we can show these kids he went down to IU and played, played and coached in the NBA and now he’s back at IU. Those dreams are possible. I think with this event it will get bigger and better. We have to showcase our schools.”

Tech defeated Washington 77-50 in the first boys game as freshman Alexander Harris finished with a career-high 21 points. The first girls game between Tech and Shortridge was called off with a 4:08 left in the third quarter with Tech leading 37-25. After a foul was called on Tech, a fight quickly ensued with players on both sides throwing punches. It ended after a few seconds and none of the players appeared to be injured. The officials and coaches conferred at the scorer’s table for several minutes before the game was officially cancelled. The Indiana High School Athletic Association was in the process of investigating the incident soon after the game.

It was an unfortunate incident to an otherwise uplifting day of basketball, highlighted by Woodson’s appearance. Cox, a close friend of Woodson’s since high school, said Smith’s influence on his players went beyond the basketball court. In talking on the phone in the days leading up to Tuesday’s event, Cox and Woodson both agreed to wear a suit to honor their former coach.

“He demanded excellence,” Cox said of Smith. “He was a history teacher here so you saw him at school all day long. He was one of the first African-American males I met who was a professional, wore a suit and tie and had an education. He instilled that in us and used basketball to teach us life skills. His old quote was, ‘Beat me there, don’t meet me there.’ Be on time, make appropriate comments, look a person in the eye. Those are things we learned from coach Smith.”

Smith was the first Black coach to lead an integrated school to a state basketball championship in Indiana when the Rockets took the 1980 title. He died in 2014 at age 72 and was inducted into the Indiana Basketball Hall of Fame posthumously earlier this year after a career that saw him win 250 games, coach five Indiana All-Stars and NBA players in Woodson and George Hill.

Woodson said Smith’s common refrain with him was “stay patient.” Those may be fitting words for Broad Ripple alumni hoping for a return from the Rockets. Purdue Polytechnic North currently uses the building. But there is some momentum out there for Broad Ripple to make a comeback, first as an elementary and middle school.

“As long as the (Broad Ripple) sign is out front, there’s still hope,” Baker said. “Once that sign comes down, I’ll get worried. The community is supportive. The neighborhood is supportive. I think Broad Ripple is going to be something again.”