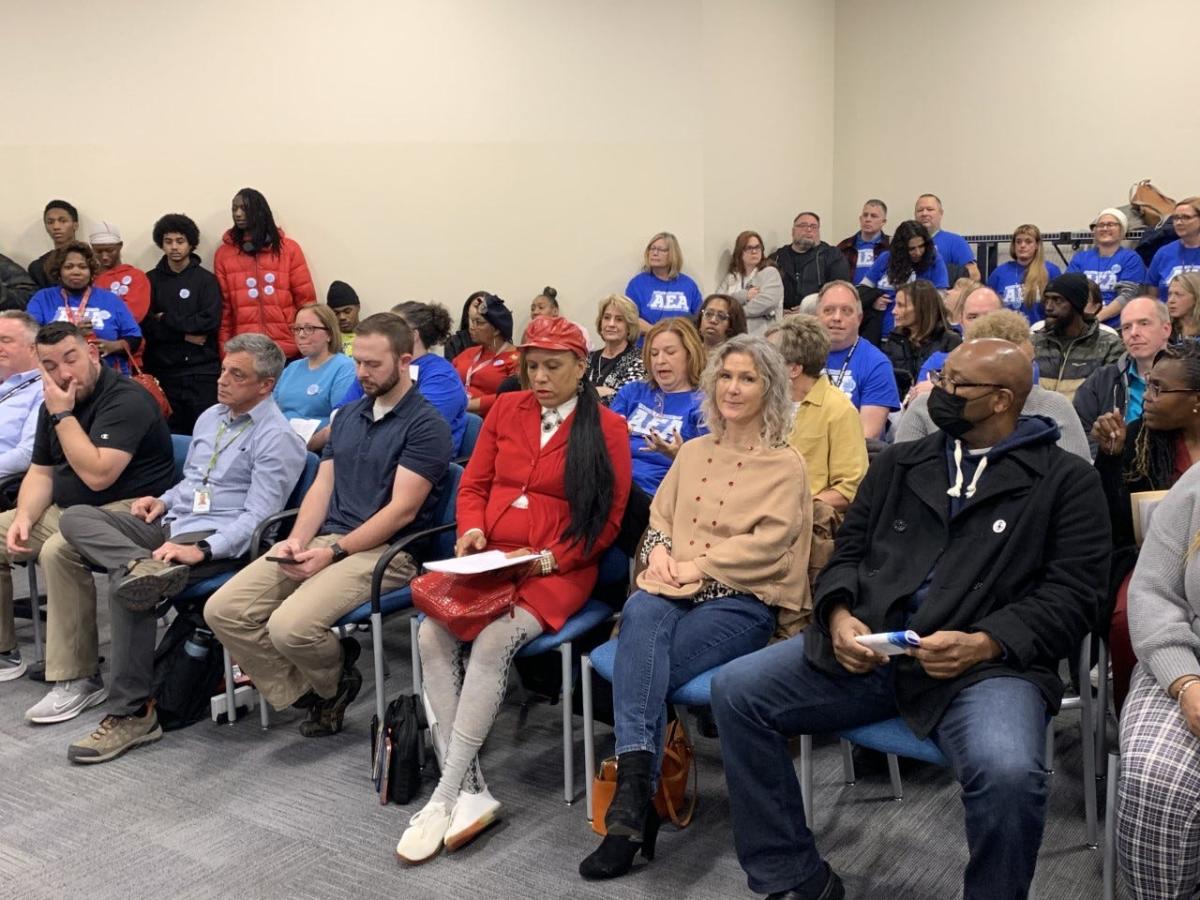 Parents and teachers packed Monday night’s Akron school board meeting, some of them excitedly urging board members and administrators to do more to address bad student behavior.

“While some of the safety issues that you are addressing will help with outside violence coming into our schools, you’re still not addressing the violence occurring inside our schools,” said Catina Stecz, a teacher at Firestone High School.

She and dozens of other members of the teachers union, the Akron Education Association, filled many of the chairs in the meeting room at the APS administration building downtown.

Some of the union members stood or sat in the hallway, watching a video feed of the meeting of the board of the 20,000-student district.

Stecz, who like some others wore a T-shirt with “AEA” on the front, was among the speakers during the public comment section of the meeting.

Her mention of the district addressing violence “coming into our school,” was a referring to the district seeking board approval Monday night of the purchase of sophisticated metal detectors, as well as airport-like X-ray machines, for all of the district’s high schools and middle schools.

The purchases was approved by board members later in the meeting.

The security upgrades, which have been in the works for some time, come after students were found with loaded guns in two separate instances last week at Litchfield middle school and Firestone high school.

Guns in schools:APS to expand use of metal detectors after Litchfield CLC student found with loaded gun

But many of the public comments did not deal with preventing guns and other weapons from being brought into schools.

Rather, the comments focused on behavior inside the buildings, including concerns about assaults of teachers.

“How can I even focus on teaching when I’m worried that I must be seriously injured before an assault on me is taken seriously by this administration?” Stecz asked.

Student misbehavior and school safety, including specifically the definition of assault, is among the sticking points in ongoing efforts by the administration and teachers to reach a new teachers contract.

The administration wants to replace the word “contact” with “injury” as a way to determine physical assault.

Teachers and other licensed professionals, members of the AEA, last month rejected a fact-finder’s recommendation that said: “The term ‘contact’ is vague and ambiguous; physical injury is more explicit.”

On Tuesday, Pat Shipe, president of the Akron Education Association, said mediation sessions, involving both sides and a federal mediator, have been rescheduled from this week until Dec. 20, 27 and 28 because of illness on the union’s negotiating team.

At Monday’s meeting, a parent said, “I am asking you tonight to support these teachers, and I am telling … they should strike and I am in full support of their actions.”

Under Ohio law, the union must submit a 10-day notice to strike. No strike notice has been given.

Melissa Pontius, a teacher at Firestone, said at the meeting that students “are unable to use the restroom at school because they don’t want to walk into a haze of vape smoke or a brawl.”

She said she saw students “walking unchallenged” in the hallway when they should be somewhere else.

“Adults are regularly challenged by students,” she said. “On any given day, I may be asked, `What the (explosive) are you looking at?”’

Teachers, she said, are not speaking out “to sensationalize things that are happening in our schools. We’re increasingly seeing more and more aggressive behaviors by a small percentage or our students.”

Board President NJ Akbar told the speakers at Monday’s meeting, “We want you to know that not only are we hearing you, but we also acknowledge there is more that we can and must do.”

He said a “community-based solution forum” is being organized to get input from anyone interested to address concerns about youth violence and behavior.

The district is taking a “multipronged” approach, he said.

“We’re all going to have to work together,” Akbar said. “This is not a situation where it’s us versus them.”

During Monday night’s meeting, Superintendent Christine Fowler Mack said the district will take “the natural opportunity of the new year … to partner with our families … really reinforcing expectations for schools, everything from where (students’) cellphones belong to really making a concerted effort to ensure that our schools are respectful learning environments, that students are following rules.”

She said efforts would be made to get more students involved with after-school activities and various student support programs.

Shipe, as well as teachers and parents, have earlier said the administration isn’t applying the correct discipline to some students.

Fowler Mack has said school safety is a top priority.

“Any suggestion that school officials do not respond quickly and appropriately to the misbehavior of students is false,” she said in a letter last month to parents.

At a board meeting last month, the administration presented data showing there were 38 instances of physical assault of a staff member referred to for expulsion consideration for the first quarter of the school year. That’s the same number as in last year’s first quarter. A union member who is a school counselor has provided data showing 60 reports of physical assaults on staff members from the beginning of the school year through Nov. 23.